CYBER MONDAY SALE | BUY ONE GET ONE FREE Inspired by the legends of old, the TURBA Olympus pairs heavenly style with god tier performance.

A unique browless frame inverts typical performance eyewear design on its head, allowing for an unparalleled field of vision that lets you soak in every detail.

Paired with a lightweight frame that sits comfortably on any face, hydrophilic nose and ear grips keep the Olympus secure.

With Olympus, it doesn’t.

TURBA was formed with a single goal in mind: Provide great quality performance glasses at affordable prices. As cyclists, runners and triathletes, we were frustrated with the cost of a good pair of glasses. For objects that too often get scratched up, fall apart, or just disappear, we couldn't justify spending 100's of dollars on something that could get run over on our next ride.

But the glasses that were affordably priced looked... Well... Terrible.

Enter TURBA. Launched in May 2020, we're a new, 100% family owned company who distribute our affordable performance glasses worldwide. Our glasses draw from eyewear trends across time, whether it be the Golden Era of the 80's, the sleek designs of the Early 2000's or the revival of large frames from 2015 onwards. No matter your preference, we've got high quality glasses that won't set you back hundreds-and we always have new pairs around the corner!

As of now, TURBA is sold exclusively at turbaoptics.com, however, we are working on providing the TURBA range to a number of local sports stores, with the hope of extending our brick and mortar offerings worldwide.

We hope you're as excited about our performance eyewear as we are. Until the next ride!

When will my order be processed?

We process orders between Monday and Friday. Orders will be processed within 2 business days of the order date. You'll receive a confirmation e-mail when your order has been shipped. All shipments come with a tracking number, so you can track your order from our warehouse to your door!

Pre-orders will ship on or before the date listed under the product listing. If your order is delayed, you will receive a notification by e-mail, with the ability to cancel your order if delayed.

Please allow extra time for your order to be delivered during holidays and sale seasons!

At TURBA, we hate paying for shipping. That's why we offer free worldwide shipping on all orders! All orders are tracked and insured for your peace of mind.

The below are estimates only. Your order may arrive faster during off peak season, and slightly slower during the holidays and other high-volume sales periods. COVID-19 may affect your order, depending on staffing constraints at your country's customs office.

Tired of misty glasses while Mountain Biking what about glasses that move around and slip down the nose, well. These are the reason I bought a pair of Turba Olympus glasses and........ all resolved every issue I have had resolved. Love them put them on and forget, clear vision, no fogging and great ventilation plus value for money is incredible. SO SO good 👍

Love my Olympus sunnies. Fit is quality, style is quality, price is fantastic. I have been trying to find cheaper cycling glasses for a while and have gone through quite a few other brands, many of them not fitting right or providing the protection needed. My TURBA Olympus are comfortable & stylish. They are lightweight yet durable and did I mention the price. Already looking at what style/colour to buy next. Can't recommend them strongly enough. 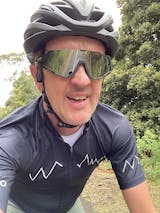 Not only do these glasses look fantastic, the way they have been crafted means zero fogging which is the most frustrating thing about cycling glasses. I’ve had a dozen rides with these so far and not once have they even started to fog up.
The other neat thing is the extra large glasses bag that come with them so when you’re putting them in your jersey whilst riding and/or travelling etc it’s not this crazy tight fit. Little initiative bug makes a difference. Good job guys.

These glasses are fantastic, the fit, price and quality of lens make these the best cycling sunnies I have ever brought.